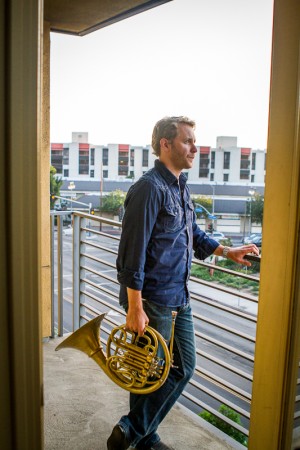 ANDREW BAIN was appointed to the Chair of Principal Horn of the Los Angeles Philharmonic by Gustavo Dudamel in May 2011.

Born and raised in Australia, Andrew was first introduced to music at age 8 when he took up the piano. Four years later, he was enrolled at Brighton High School in their special music program and soon after switched to the French horn because he loved the sound. Andrew ultimately received a Bachelor in Music from the Elder Conservatorium of Music at the University of Adelaide studying with Patrick Brislan. He furthered his studies with Geoff Collinson in Sydney, Hector McDonald in Vienna, and in 2003 completed a Graduate Diploma in Chamber Music under Will Sanders in Karlsruhe, Germany.

A regarded solo artist, Andrew has appeared regularly as a soloist with the LA Phil since joining the orchestra. Andrew has also appeared at the front of the stage with the Melbourne and Queensland Symphony Orchestras, Colorado Music Festival, Colburn Orchestra and Music in the Round Festival. In 2015 Andrew presented the world premiere of Brad Warnaar’s Horn Concerto with the Hollywood Chamber Orchestra and looks forward to recording the work in 2016. A keen chamber musician, Andrew loves to explore the possibilities of the horn in various ensembles and most recently gave the first performance of Geoffrey Gordon’s Winterleben for Mezzo Soprano, Horn and Piano.

In addition to performing, Andrew is passionate about education and is proud to be the Horn Professor at the Colburn School Conservatory. Andrew has held teaching positions with the Australian National Academy of Music, University of Melbourne, Tasmanian Conservatorium of Music and Sydney Conservatorium. He has also given master classes and lectures throughout the United States, Europe and Australasia.

Throughout 2015 Andrew appeared as guest principal horn of the Chicago Symphony and Berlin Philharmonic and the Australian World Orchestra’s concerts with Simon Rattle in Sydney and Melbourne and the AWO’s groundbreaking tour throughout India with Zubin Mehta. As Co-host of the 2015 International Horn Symposium here in LA, Andrew was thrilled to welcome over 1000 horn players and musicians to the Colburn School for a week long celebration of everything horn!

Andrew can be heard on numerous Hollywood films and was overjoyed to fulfill the dream of a lifetime working with John William’s as principal horn for the score of ‘Star Wars: The Force Awakens.’

As well as appearing at the Hollywood Bowl with the LA Phil, over the Summer Andrew is the Principal Horn of the Mainly Mozart Festival in San Diego and faculty member of the Aspen Music Festival and School.

In addition to music, Andrew loves traveling, cooking and exploring L.A. with his beautiful wife, Rupal. If he’s not working, you will most likely find him on the golf course trying to improve his handicap.

Andrew looks forward to presenting Masterclasses in London and New York in 2013 as well as performing and teaching at the Pacific Music Festival and Aspen Music Festival in the Summer.

In addition to music, Andrew loves traveling, cooking and exploring LA. If he’s not working, you will most likely find him on the golf course trying to improve his handicap.